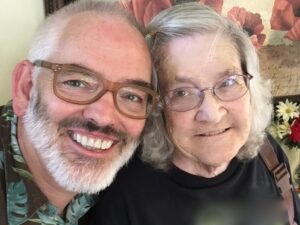 Today is my sister Betty’s birthday; she would have turned 78, but died a preventable death in Florida this past summer, a result of medical malpractice. You could also say she died because of a series of forgivable human errors. But they were still errors, and she’s still dead.

Two months after closing out Betty’s life on earth, I decided to pursue a legal action in an attempt to correct the errors that led to her death and perhaps save someone else. This was the last thing I could do to honor my sister and give meaning to her life; I knew Betty would have approved of my efforts, and imagined her cheering me on. But I soon learned the circumstances of her death didn’t matter. Because of a bizarre loophole in Florida law (unique among 49 other states), there was simply no case to pursue.

Countless Florida families have been affected by this “free kill” law (Google it), and some legal professionals and advocate groups like the Florida Medical Rights Association were hopeful it might finally be overturned this spring. I was invited, along with family members of other victims, to add my voice in direct testimony before the state legislature during their spring session in Tallahassee. Instead, I wrote this 600-word OpEd that was to be placed in various newspapers throughout the state.

That didn’t happen. And in a defeat for families–and a victory for corporations–the state Senate once again abandoned bipartisan efforts to overturn the law.

I was pondering all this on today’s snowy, sunny dog walk, and I’m sharing this because I couldn’t send Betty a card or call this morning to sing to her.

“A Free Kill” by Edward McCann

Did you know that, in Florida, if your loved one is injured or killed due to medical malpractice, you have no recourse unless the victim was married or had minor children?

I recently learned about Florida’s notorious “Free Kill” law after my sister died a preventable death—failed the same day by a hospital, a home health care agency, and an ambulance company.

After midnight, while recovering from surgery and a life-threatening infection, Elizabeth was loaded into an ambulance for transport home. The home health nurse dispatched to receive my sister, review her discharge instructions, and—most critically—to reconnect her intravenous lines, instead went home because of a miscommunication with the hospital. Near 1 a.m., ambulance attendants transferred Elizabeth to a chair and noted “the call was without incident.”

Except no one knew Elizabeth was home, and no one was there to help her when things went wrong.

She died before sunrise in that same chair.

Weeks later, during an hour-long Zoom call, four hospital administrators spoke about their internal case review, wrung their hands about human error, and told me how sorry they were for my loss.

A distracted nurse on a busy Friday night. An innocent mistake. An unnecessary death. It could have happened to anyone. The miscommunication that led to Elizabeth’s death was a simple human error. I accept that and don’t want to punish the hospital that had, up to that point, taken good care of my sister. But I also want her death to mean something, and a lawsuit is one of the few ways to make a hospital admit mistakes and fully investigate a death; to prompt a meaningful change in policy or procedure that could prevent what happened to Elizabeth from happening to someone else.

My decision to initiate a legal action wasn’t about money; it was about holding institutions accountable and honoring my sister’s life. But after consulting with a respected malpractice attorney, I discovered the circumstances of Elizabeth’s death didn’t matter, simply because she was unmarried with no children.

Section 768.21 of Florida’s Statutes states that only spouses and minor children of a decedent can pursue damages for pain and suffering in malpractice cases.

There is simply nothing like this “Free Kill” law in our other 49 states. Put in place 20 years ago, it benefits insurance companies and well-paid lobbyists whose goal is to lower malpractice insurance rates for doctors, limit the number of malpractice cases that can be brought to the court, and reduce amounts paid out to settle claims.

It means adult children over twenty-five can’t bring suit if their parents are the victims of medical malpractice, nor can parents of adult children over age twenty-five who died at the hands of medical professionals. Bottom line: You must be married to the person or be a minor child of that person. Under no other circumstance can you bring your case to a court of law.

Many Florida families have been affected by this law, and thousands of people have had experiences similar to mine. Opponents of Florida’s “Free Kill” law are trying to change it, and while powerful forces have so far been successful in preventing the law’s repeal, the state legislature in Tallahassee will be reviewing it again in its spring session.

If you live in and have loved ones in Florida, please contact your state legislators asking them to support the repeal of the “Free Kill” loophole in state law. Because while it’s too late for my family, it might not be too late for yours.  MyFloridaHouse.gov/FindYourRepresentative

Edward McCann is an award-winning writer/producer and the founder and editor of Read650.org, celebrating the spoken word with live events in New York City and throughout the tri-state area. A long-time contributing editor to Country Living, his features and essays have been published in many literary journals, anthologies, and national magazines, including Milieu, Better Homes & Gardens, Good Housekeeping, The Irish Echo, The Sun, and others. His essay, “Pregnant Again,” was selected for the anthology, Listen To Your Mother: What She Said Then, What We’re Saying Now, published by Penguin. He lives and writes in a pastoral spot about eighty miles north of New York City, and is at work on a collection of essays about life in the Hudson Valley.