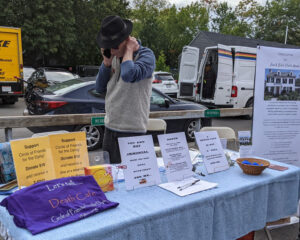 They called him Johnny Average, his stage persona. This British rocker could really charm the crowd at Woodstock’s favorite post-festival music venue, The Joyous Lake. Quite the collection of fine musicians would join him, no matter that he could not break a song into the Top Twenty. Music did not pay his bills, but it surely stirred our hearts.

Then came the crushing chest pain, not the usual presenting complaint of a patient who walks into a rural family doctor’s office. He was pale and diaphoretic. When my stethoscope touched his chest, a harsh blowing heart murmur was audible, as were crackles of fluid backing up into his lungs. In a flash, Woodstock’s beloved Volunteer Rescue Squad was on the scene.

My diagnosis was an acute myocardial infarction, a heart attack critically complicated by a rupture of the septum dividing the ventricles of the heart. Prognosis: grave. He had literally blown a hole in his heart. Would he even survive the helicopter ride to Albany Medical Center?

Three weeks later, Johnny Average strolled back into my office. I thought I was seeing a ghost. He proudly unbuttoned his shirt as he showed off his large scar. The surgeons had repaired the defect between the chambers and bypassed his coronary blockages. He called me a hero for my quick action. I reframed that point of view by praising the power of the life force within him that allowed him to survive against staggering odds. I let him know that he was the hero, and, like most heroes, he simply said, “I just did what I had to do.”

A year later, another heart-stopping diagnosis, this time throat cancer. No amount of warning prepares a patient for the ordeal of radiation and chemotherapy–to be unable to eat, unable to swallow, an absolute need for tube feedings. No singing. He handled all that was thrown at him by the medical profession with astonishing grace and optimism.

When the follow-up PET scan showed the tumor still active, Johnny agreed to disfiguring radical neck surgery, even if it meant a tracheostomy, a hole in his trachea. Once again I called him a hero, and once again he rebutted, “I’m just doing what I have to do.”

Sometime later, my nurse handed me the report of the final PET scan moments before I entered the exam room. Johnny’s tumor was back with an undeserved vengeance.

Does he already know intuitively? Does he sense it?

Choked up, I sat on my swivel stool. Before I could speak, he placed his finger over his trach tube. In a rough gravelly tone he whispered, “Listen Doc, I could be miserable and angry and pissed off, and then I’m going to die.” The tears were streaking over my reading glasses. “Or I could just enjoy each day and make the most of each moment, and then I’m going to die. I think I’ll choose the latter.”

He practiced and arranged for one more music concert with his friends, although it was not to be. He hung on just long enough until his mom could fly in from England. Ever the entertainer, ever the performer, he gave her a grand tour of our beautiful Catskills. Two days later he was gone.

Like most doctors, I can be blinded by the day-to-day administrative hassles and insurance company battles that come with the job. I am reminded, however, what a luxury it is to be a Family Doctor and to be touched by a patient’s wisdom and grace, if the doctor is open to being touched.

Oh, how Johnny “Not So” Average would have loved to have his story heard …even as his voice was silenced.

And not a day goes by that I don’t remind myself and my patients, “Choose the latter!”

Randall Rissman, MD, is the founder of Maverick Family Health in Woodstock, NY. He now serves on the CFD Board of Directors. (Photo by Ann Hutton–Randy tabling at Kingston’s O+ Festival in October, 2021.)